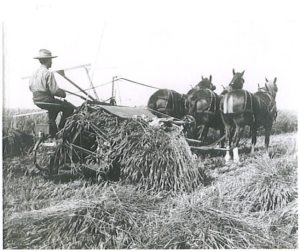 Officially founded in 1907, the Lacombe Experimental Station is still used for both research and recreation. From weddings on the picturesque grounds, to evening visitors out for a walk, to cattle sales in the Pavilion, the grounds serve the local community of Lacombe on a regular basis. In a sense, this was always the goal of the Station: to give visitors a glimpse of the possibilities of the Parkland region that surrounds Lacombe.

The successes of this initiative included the development of several new strains of crops, including Marquis Wheat, that could endure the Canadian climate and promote the settlement of the Prairies.

Lacombe was in a promising position in 1900. With over 100 people, the town was larger than Red Deer, and citizens were eager to make the most of this opportunity. Not every town thrived in early Alberta: the success of a town was heavily influenced by the ambition of entrepreneurial citizens and by the success of agriculture in the area.

In 1904, the newly formed Lacombe Board of Trade started attempting to establish an Experimental Station in Lacombe in order to promote the town and attract more settlers. Despite stiff  competition with other towns, a series of extensive negotiations and political deals led the creation of the Lacombe Experimental Station in 1907. Mr. W. F. Puffer, a member of the Board of Trade and an MLA in 1905 was highly involved in the bargaining process.

Mr. Hutton was appointed as the first Superintendent of the Research Station, even before the purchase of the land was finalized.

Even with a small staff consisting of only 5 members, many tests  were started in 1907 and several buildings were constructed. Life was not easy, and Seymour Edmunds, one of the first employees of the Station, reported that there was least some snow every month of 1907.

From Crops to Cattle

Initially, research at the station focused on testing pre-existing crops in the region and developing effective local agricultural practices. By 1913, Mr. Hutton had begun research on dairy and beef cattle, poultry, sheep and apiculture.

Horses were initially used for work, rather than research.

In 1913, dairy production, with a focus on cheese manufacturing, started at  the Station. The cheese products were sold in Edmonton and  Calgary as an attempt  to stimulate interest in  dairy manufacturing.
This effort was successful as two large dairies took up cheese manufacturing. The sale of cheese also proved to be a popular attraction at the Station during the summer. In the early 1920s, Lacombe had the biggest dairy of all the Experimental Farms and Stations, but it was closed in 1924.

From 1909 to 1917, train tours with reduced rates were arranged to attract visitors to the Station, bringing as many as 1,200 visitors a year to Lacombe. These tours showcased the various research projects done at the Station and inspired many people to order seed samples and trees—mostly grain samples, potato seeds, Manitoba Maples, and caragana bushes—for their own homes.
The Board of Trade was no doubt pleased with the results of the Station while the local  farming community reaped the benefits of  the experiments and the services provided by the Station.

Early Women on the Experimental Station

The work done by women was always vital to the success of farming,  especially during the early years of Western settlement. While sometimes overlooked, settlement and farming could not have succeeded without these women.

The first female to be employed directly  in the agricultural work of the Station was Jessie Grant from Scotland, who worked as the dairymaid from 1913-1914. Prior to 1910, other women were typists at the Station. However, perhaps credit for being the first woman working on the Station should go to Mrs. Mary Hutchinson who worked as the housekeeper starting in 1907.

Mary and her family came from Barrhead, Scotland in 1907 and both Mary and her husband Robert started work at the Station immediately. Mary had to supply the food for meals and was paid $15 per month for each of the seven men under her care. Excerpts from her journal reveal some Mary’s life in her new home.

June 27, 1907.
“We rise at five (at least the men do). I get up in time to have breakfast ready at six. . . .  They have meat, eggs and potatoes to every meal, so it makes a good lot of dishes to wash. We have not much furniture, no more than we could possibly help. . . . Everything is much dearer than at home: the only things cheaper are butter, eggs and meat. It is an awful job to wash, as there is so much lime in the water. . . . It is very  quiet here: I was here six weeks before  I spoke to a woman and not many  yet.”

Initially, the focus of work at the Station revolved around research and public education. The exception to this trend occurred when Mr. Francis Henry Reed became Superintendent in 1920. While Mr. Reed did expand much of the crop and agricultural research started during Mr. Hutton’s time, it was not his primary focus.

Mr. Reed was a strong advocate of the show ring and pushed for the showing of stock at major exhibits throughout Alberta and later shows across North America. By 1925 multiple types of purebred animals were being  exhibited every year, often with excellent  results. Cattle and horses (Clydesdale and Shire) won many top awards.

There was a cost to Mr. Reed’s emphasis on showing as it also drew on the resources and  reduced the emphasis on livestock research at the Experimental Farm. Due to this and other factors, staff numbers stayed constant and research in dairy animals and sheep stopped entirely in 1924. However, there were  stallions available for breeding to anyone who wished to send their mares to the Station, an important service for an industry still reliant on horse power.

Despite the best efforts of the scientific approach to farming at the Station, cutworms wreaked havoc on many of the test crops in 1930. Then extreme winds destroyed cereal and garden test plots in spite of protective hedges.

1930 marked the temporary end of all breeding work with cereals and garden crops. World War II then took away many of the staff for military service, severely limiting the work done by the Station during this time.

Resuming Research:  1947 to the Present

When Mr. George DeLong  became Superintendent in  1947, he began the process  of rebuilding the research support and facilities that  had stayed relatively unadvanced during the war years and resumed the  type of work carried out by Hutton. Significant increases in technical staff and the construction of additional office and lab space would take place over the next decade.

Under the leadership of Mr. Delong and Mr. Stothart, there was a firm emphasis on listening to the concerns of producers and responding to what they saw as the real needs. The result was a great deal of industry involvement for the staff of the station.

In the second half of the century, horticultural research at the station gradually faded out of the picture. At the same time research on poultry stopped as did the use of horses for plowing or managing the cattle herd. Crop breeding research expanded for a number of years, including wheat, barley and oats.

The Centre’s focus on  swine cross-breeding  in  the late 40’s ultimately resulted in the release of the “Lacombe Hog” in 1957 and this became one of the most publicly recognized outputs from the Centre in that era. This hog was found to be superior in birth weight, weaning weight and growth after weaning. In addition, crossbred pigs sired by Lacombe boars excelled in vigour, growth rate and carcass quality.

Another important development of the Stations’ was the multi-faceted meat research program that studies meat safety, quality, and production factors. In fact the grading system presently used on meat, such as for Alberta AAA Beef, resulted from the research conducted at Lacombe.

Lacombe got its own meat slaughtering facility in 1984 making it the only place in Canada where researchers can study the factors that impact meat quality throughout the animals’ lives and the meat processing.

Howard Fredeen is perhaps one of the most well-known individuals who has worked at the Lacombe Research and Development Centre. Dr. Fredeen came to work at the Lacombe Research Station after earning his MSc from the University of Saskatchewan in 1947. Along with J. G. Stothart, Fredeen was responsible for the development of the Lacombe Hog. Dr. Fredeen is also known for his significant contributions to Canadian practices in livestock breeding, his many scientific and technical papers, and representing Agriculture Canada internationally. Locally, Howard has made substantial contributions to the preservation of Lacombe’s history and to the work of the Lacombe & District Historical Society.

Now one of 20 similar research centres, the Lacombe Research and  Development Centre is still an important part of Agriculture and Agri-Food Canada. 400 head of beef cattle and 100 sows are still maintained by the Station as part of their research. Despite the fact that only 2% of  Canadians live on farms, agriculture is a vital part of Canada’s industry, making the continued work of research centres as important as ever.

“The science and innovation activities at the Lacombe Research and  Development Centre focus on the study of food safety, red meat quality, carcass grading, cereal breeding and forage/beef production.  The Centre’s  areas of core research are aligned with national priorities to help the sector adapt and remain competitive in domestic and global markets. Greater participation in research networks and industry-led partnerships expands the Centre’s innovation capacity.”

Livestock Pavilion: A Focal Point for the Community

1935 saw the  building of the Livestock Pavilion as a Federal funded “make-work”  project. The Lacombe and District Agricultural Society contributed land adjacent to the Experimental Station for the building site.

Since its creation, the Livestock Pavilion has hosted countless agricultural events as well as political meetings, assemblies, talent shows, and much more. Some of these events were hosted by the staff of the Experimental Station, further connecting the Station  with the farming community.

The Pavilion has served as a bunkhouse, cafeteria and teaching auditorium for the Research Station while the Agricultural Society hosts dances and livestock sales. Ownership of the Pavilion was eventually transferred to the Lacombe and District Agricultural Society, which still owns and operates the building.

Build in 1907, the  Superintendent’s house was an important architectural feature of the Station. It had electricity, a forced draft furnace, plumbing and running water powered by a windmill. This residence had multiple  purposes, serving as the  Main Residence and the Office until 1914 when a separate Office was constructed. It also housed  the guest rooms for important visitors.

In 1947, the residence was  renovated and the top floor was removed. In 2012, the building was deemed to be unsafe and demolished. The house was the last of the original buildings on the Station.

Special thanks to the following contributors

The Lacombe and District Historical Society would like to express its indebtedness and gratitude to Dr. Howard Fredeen for his extensive work in documenting the history of the Lacombe Research and Development Centre. Dr. Fredeen served as the head of the Animal Science Section at the Lacombe Research and Development Centre from 1955 to 1979 and earned several awards for his work. Lacombe Research Station: 1907-1982 by Dr. Fredeen was particularly influential on “National Context, Local Needs.” Dr. Fredeen recently received the 2016 Alberta Historic Resources Foundation’s Outstanding Achievement Award for his work in documenting local Alberta history.

back to exhibits
0 replies

Want to join the discussion?
Feel free to contribute!

The Lacombe & District Historical Society acknowledges that we are living, working, and volunteering in the traditional territories of the ᓀᐦᐃᔭᐤ Nêhiyaw (Cree) people of Treaty 6. We are respectful of the many First Nations, Métis and Inuit people whose footsteps have marked this land for centuries.