The Lacombe Museum is moving into the Flatiron Building – we look forward to welcoming you in 2022 with our year-long opening celebrations.

The Flatiron Building Museum is open year-round to the public offering rotating exhibitions, archival services, local shopping, programming, and workshops. To inquire about our services, please contact us directly at [email protected]. 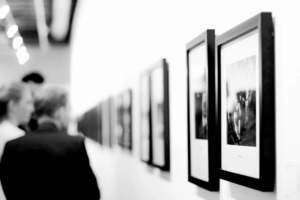 The Flatiron Building is an integral part of the landscape of Lacombe and Central Alberta. As one of the most recognizable architectural structures, built in 1904, it is the oldest of three flatiron buildings that exist in Alberta. Of the other historic buildings, the Gibson Block, is located in downtown Edmonton, and there is the Medicine Hat Flat Iron.

Flatiron buildings receive their name from their corner-block shape, which resembles the triangular shape of a cast-iron flat iron. A rare kind of structure, Lacombe’s Flatiron building follows the same type of architectural design as the Fuller Building in New York which was built just two years before in 1902.

The Flatiron Building in Lacombe was designed in 1903 by two architects from Montreal named Hogle and Davis and was opened in 1904 as home to Lacombe’s first bank, the Merchants Bank of Canada. The bank was established in 1901 and before moving into this building had operated from a rented schoolroom as well a room in the Victoria Hotel. This building is an example of early twentieth-century Edwardian Classical Revivalist architecture. This architectural style was commonly used for banks, courts, government buildings, and similar establishments wanting to convey a sense of power and stability through architecture. Here in Lacombe, it greatly assisted the newly built bank to convince individuals that their money would be safe when stored in their coffers.

View our Events Page or join our monthly eNewsletter to keep updated on everything happening at the Lacombe Museums!