Opened to the public as a museum on May 25th, 1984 by Roland Michener himself, the Museum displays items from Michener’s personal and family collections.

The Michener House Museum is open Victoria Day to Labour Day to the public for live heritage demos and tours.  To inquire about our Fiber Workshops, please contact us directly at info@lacombemuseum.com. 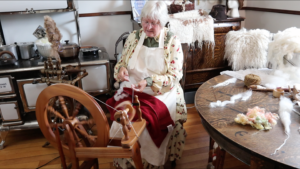 The Michener House was built in 1894 as the Village of Lacombe Methodist Church Parsonage. Today it is historically significant as the birthplace of Right Honourable Roland Michener, former Governor General of Canada, and as the parsonage of his father, Edward. The house is also historically significant as one of the oldest remaining buildings in Lacombe, and illustrates the important first phase of the town’s development. The Michener House is a modest example of typical turn-of-the-century frame building construction.

After the departure of the Michener family, the house passed to successive ministers, was expanded with an addition to the rear in 1918 and subsequently converted for use as a church hall. The church was also used as a hall after the congregation joined with that of St. Andrew’s Presbyterian Church in Lacombe to form St. Andrew’s United Church in 1922. In later years the church saw service as the Lacombe’s Boy Scout Hall, and was finally demolished in 1984.

Contact information, hours and location for the
Michener House Museum