Forging a connection with the past

The Lacombe Blacksmith Shop Museum is open Victoria Day to Labour Day to the public for live heritage demos and tours.  To inquire about our Blacksmith Workshops, please contact us directly at [email protected]. 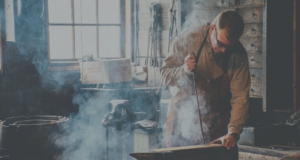 The Blacksmith Shop Museum is a Municipal and Provincial Historic Resource, built in 1902. As the oldest operating blacksmith shop in Alberta, it is located on its original site and much of the original machinery, including the forge, trip hammers and engine, are still in operating condition.

Purchased by the Lacombe and District Historical Society in 1991, the blacksmith shop was restored as a museum and designated as a Provincial Historic Resource by the Government of Alberta in 2011, and Municipal Heritage Resource by the City of Lacombe in 2016.

Over the summer months, from Victoria Day to Labour Day, come see how iron is bent and formed into shapes through intense heat and loud trip hammers, and learn about the history and politics of blacksmithing in Western Canada. Try your hand at the forge by registering for our Workshop Series.

More information can be found on Canada’s Historic Places or at the Alberta Provincial Historic Resource.

The blacksmith shop, now the Lacombe Blacksmith Shop Museum, was first opened in 1902 by A. F. Weddle. It was the fourth operating blacksmith shop to open in Lacombe at the time, so while it may seem like an isolated relic on its original site now, it represents a once bustling and competitive industry.

Ownership of this shop on Glass Street changed hands several times over the years, until it was taken over in 1939 and later purchased by Jules Selvais. The Selvais family owned the shop for the longest period, from the early 1940s until it was purchased by the Lacombe & District Historical Society in 1993. Jules and his son Roger operated the shop and added a welding shop on the west side in 1953. During the early 1950s, actual blacksmithing ceased, but many of the tools, such as the imposing Trip Hammers, were retained, a fact which greatly enhances the historical value of this site. Roger and his son Ronald operated the shop commercially until 1987.

In 1991, not long after commercial operations ceased, the Lacombe & District Historical Society began looking into purchasing the shop and restoring for use as a museum. After 2 years of fundraising, the shop was bought by the LDHS and restorations began during the summer of 1993. The foundation, interior and exterior walls, and the roof were repaired and the sliding doors at the front of the shop were restored. The Blacksmith Shop Museum officially opened on July 16, 1994 as part of Lacombe Days celebrations. In 2011, the Blacksmith Shop Museum became a designated Provincial Historic Resource as the Oldest Blacksmith Shop in Alberta on its original location. In 2015 it was designated as a Municipal Historic Resource, and is now a popular attraction where museum guests can watch live demonstrations or enrol in blacksmithing classes.

With financial support from the Alberta Historical Resource Foundation, Echo Lacombe Association & the City of Lacombe Heritage Resource Committee, in 2019 the Lacombe & District Historical Society funded conservation and restoration work to the Lacombe Blacksmith Shop. Denzil Paterson of Central Valley Furniture dismantled and repaired all of the original wooden windows, did some minor repairs to two of them, made new storm windows to replace the existing plexiglass over the windows, repaired flashing above doors, and repainted all of the exterior woodwork including all doors and signage.

Pending Provincial Grant approval, in 2021 work to the buildings envelop, including roof and siding repairs, will be completed by Central Valley Furniture. Repair work and servicing of the two original trip-hammers and antique engine are also planned.

Contact information, hours and location for the
Blacksmith Shop Museum