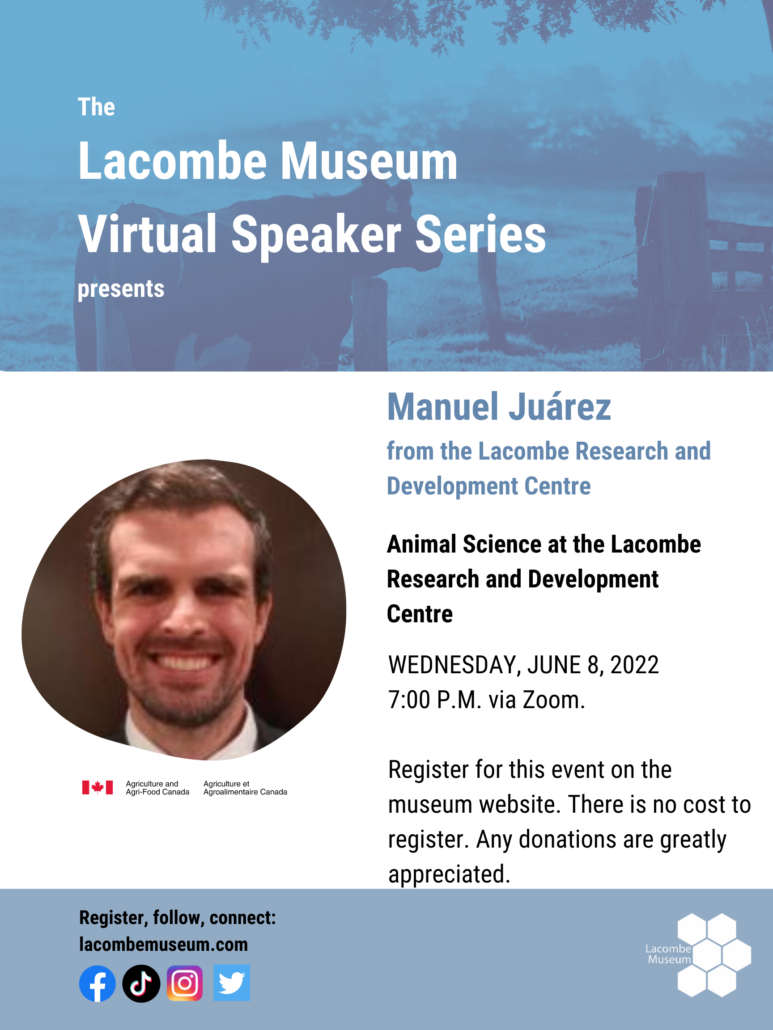 Join the museum for our speaker series that is bringing history to our schedule of events in Lacombe! Members of the Lacombe and District Historical Society will have the ability to request access to recordings of each speaker in this series. To learn more about membership click here.

**Please register for the event via the Zoom link**

The Lacombe Experimental Station was established in 1907 in Lacombe (AB) on a quarter section of land, with a staff of six employees. Early experimentation focused on testing livestock breeds and varieties of crops for their adaptability to Lacombe’s climatic conditions. Today, the Research and Development Centre (Lacombe RDC) and is one of Agriculture and Agri-Food Canada’s (AAFC) network of 20 research and development centres. With 100+ employees, a satellite farm in northern Alberta (Beaverlodge), and scientists collocated at the University of Alberta, the Lacombe RDC still conducts research on two major strategic activities: livestock and meat production, and crop sciences. In this talk, you will have the opportunity to learn some details of the history of the Lacombe RDC, with special emphasis on the livestock and meat programs, including the famous Lacombe Pig. We will finalize the presentation by reviewing current research programs, their most significant projects, and their links to this area of Canada.

Dr. Manuel Juárez completed his Ph.D. in Animal Production from the University of Seville in 2007. Previously, Dr. Juárez completed an MBA and a DVM, and worked in research labs in Italy and Ireland. He also worked in the private sector in Finland and Spain. In 2009, Dr. Juárez arrived to Canada as a postdoctoral fellow, and two years later he became the Livestock Phenomics Scientist at the Lacombe RDC. Dr. Juárez applies a holistic approach to evaluate the interactions between genetic and environmental factors. His goal is the optimization of livestock production systems to maximize profitability while maintaining or enhancing carcass and meat quality.